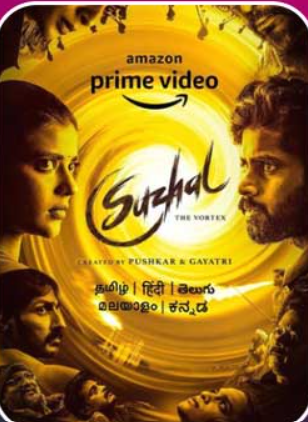 If mainstream films have largely set their police procedurals in metros, Over-the-Top platforms seem to prefer small town settings following the precedent set by successful international web series such as Broadchurch and Mare of Easttown. Closer home, Raveena Tandon’s Aranyak (Netflix) was set in a small town in Himachal Pradesh. The charm of the small town is that everybody knows everybody, and that makes a police investigation juicier because secrets are bound to tumble out; the investigation is coloured by the police’s own equations with the town people. Suzhal unfolds in pretty much the same way.

Narratives mounted against the backdrop of a neighbourhood or a small town seem to have tremendous potential for drama. Filmmakers have done this time and again in successful TV shows and movies — globally. It is a winning formula for the simple reason that the main arc of such stories is the community through which we get a sense of the bigger picture that is at play. In Suzhal: The Vortex, the eight-episode series created by Pushkar and Gayatri, the main story arc is about the small-knit community.

A microcosm thrives in this fictional town called Sembaloor, where everybody knows everybody. There is also a grave danger in knowing too much or knowing too little less — Suzhal lies somewhere in between. At least three characters find this closeness of the community claustrophobic and want to leave for a big city. And all three of them share a deep secret buried within their heart. But Sakkarai aka Chakravarthy (an excellent Kathir) savours this knowledge — of knowing too much about the people and how they behave. This makes sense in his line of work. He is a police officer who is now in charge of the case of a missing girl. Shouldn’t it be a cakewalk? As Sakkarai digs deep, he uncovers the sides of the town he wasn’t aware of. “I thought I knew them,” rues Sakkarai at one point. And this is where Sakkarai’s character arc ends.

Some of the best investigative series in the world have centred themselves in a small town. There is something intrinsically intriguing about a crime happening in a place where everyone knows everyone else. The organic conversion of believability into suspicion is what every small-town crime mystery worth its salt heavily relies on. Suzhal is no different from some of its illustrious predecessors in this genre, such as Broadchurch, Fargo, Mare of Easttown, and of course, our very own Drishyam. However, this doesn’t mean Suzhal is any less interesting or unoriginal, but in fact, it is this familiarity that makes us warm up to the town of Sambalur and its inhabitants who all seem to harbour one secret at the very least.

Using the medium to the best of their advantage, creators Pushkar and Gayatri, take their time to develop each of their characters, and expertly weave in red herrings from time to time. There are three principal plot points in Suzhal. One, a cement factory that provided a livelihood for the inhabitants of Sambalur is burned down on a random day, and cops Regina (a terrific Sriya Reddy) and Chakaravarthy a ka Sakkarai (a restrained Kathir acing it) are on the heels of finding out what happened.

Two, Nila, the younger daughter of the cement factory’s workers’ union leader Shanmugham (an effective Parthiban) goes missing, and his elder daughter Nandhini (a brilliant Aishwarya Rajesh, who gets the mass entry reserved for our heroes) returns home to support the family. Regina and Sakkarai take over this case too. Three, the traditional Mayana Kollai festivities are underway, and the town’s police force is used to provide security for the event. It is impressive how the narrative choice of Mayana Kollai being interspersed with what’s happening in the investigation works so well, and it is a wonderful documentation of an event that is not often seen on our screens.

The title of the series was announced in April 2022 by Amazon Prime Video at its first ever Amazon Prime Present India event in Mumbai along with 40 other titles. Touted-to-be an investigation thriller, Suzhal: The Vortex is written and created by filmmaker duo Pushkar and Gayathri.

The Tamil series features Kathir, Aishwarya Rajesh in the lead roles with R. Parthiban and Shriya Reddy in pivotal roles. Suzhal is set to premiere on Amazon Prime Video on June 17, 2022.