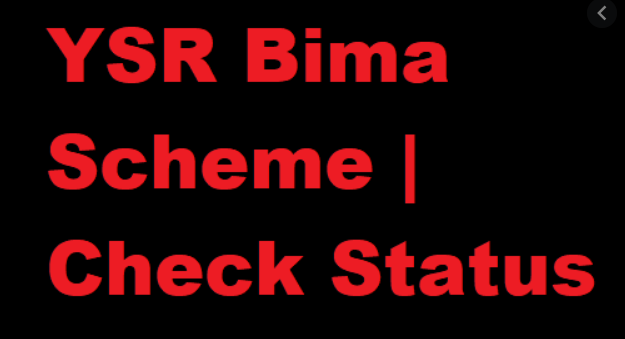 The YS Jaganmohan Reddy government, which has made a name for itself as a people’s government with a large number of welfare schemes, has taken another crucial step. YSR has launched an insurance scheme to help poor families.Andhra Pradesh Chief Minister YS Jagan Mohan Reddy launched YSR Bima scheme on Wednesday. The scheme will benefit 1.14 crore, primary bread earners, in the unorganized sector.

The claiming amount would be directly credited into the beneficiary bank account within 15 days of the claim being made. The Chief Minister also announced that immediate assistance of Rs 10,000 will be provided to the families through village and ward secretariats.YSR Bheema scheme is a kind of insurance Scheme which is providing security on the accident to families of poor and unorganized workers of Andhra Pradesh. Under this scheme, if the beneficiary dies due to an accident or suffers a permanent disability then the insurance amount will be received by the beneficiary’s family member. YSR Bheema Scheme an insurance cover from Rs 1.5 lakh to Rs 5 lakh which will be deposited into the bank account of beneficiary family member bank account within 15 days. In addition to this amount, Rs 10000 immediate financial relief will also be given by the government of Andhra Pradesh. Under the scheme, the beneficiary has to pay a premium of Rs 15 per annum.

Chief Minister YS Jagan Mohan Reddy on Wednesday handed over financial assistance under the YSR Bheema scheme to families who have lost the head of household due to an unforeseen disaster. At the camp office in Tadepalli, CM YS Jagan deposited the cash directly in the beneficiary’s account virtually. To this end, since the inception of the scheme on October 21, 2020, Rs. 254 crore will be paid. Local ministers, MPs, MLAs and MLCs were present on the occasion.

Chief Minister YS Jagan Mohan Reddy on Wednesday handed over financial assistance under the YSR Bheema scheme to families who have lost the head of household due to an unforeseen disaster.